This is the rest of our adventure at Moab from last week.

The weather overnight was wonderful. We even ran our AC/fan for a little while (thank you campground electricity)! We woke up with the sun and began our day. We decided on a semi-easy breakfast of pancakes and vegan sausages so we could start our adventures early. The pancakes are from a mix from Sprouts that we can keep in the camper. We just add some almond milk and flax egg. The sausages are our new favorite find from Field Roast and are apple maple flavored. This is where it is great that the grill has the option to use both grill and griddle. We also purchased a Chai Smoothie from Bolthouse, which was ok but we added additional Tazo Chai to it.

We did the dishes, walked the dogs, and then packed up snacks/drinks for our Jeep adventure. We headed South on Highway 191 towards Canyonlands National Park. Because we know how much Bella loathes Jeeping, we checked with the one dog boarding place in Moab for space, but they were actually overbooked. Business opportunity idea – Moab needs more dog boarding/daycare places!!

The first Jeep trail we started on is called “Looking Glass Road to Anticline Overlook”, #61 in the Jeep Book. The road is mainly a country dirt road and considered easy, but had some cool things to look at. We got to see a couple of arches up close and personal without having to trek miles into nature.

It was very interesting to get to see old Cave Houses. It had looked like someone more recently had been living there, as there were some trashed mattresses and belongings left behind. We tried to imagine a time when people lived like this. 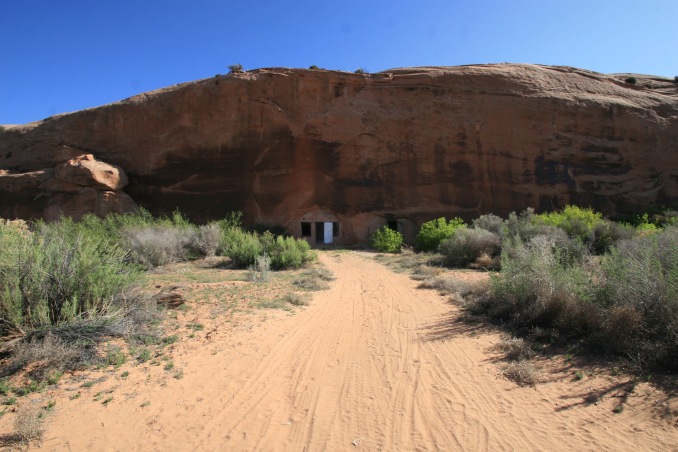 Then we came upon the entrance for a current homestead called “Rockland Ranch”, which contains approximately 15 newer cave houses with amenities like solar panels on top of the rock. We later researched the area and found an article from the Atlantic stating that this is a group of polygamist/monogamist Mormon families that have been living here for decades. They are pretty self sufficient with gardens, stores, power, etc. We were just fascinated by the architecture of the homes.

From the middle of this Jeep trail, we turned onto a harder one called “Kamikaze”, #62 in the Jeep Book. This one was a combination of difficulties, with it primarily being medium and a little hard. The trail itself is approximately 2.4 miles long, but you return the way you came. This was Stacy’s first time on some steep inclines. There were some great views as we drove along the tops of the canyons – if you have a fear of heights, this might not be a good one for you to go on! The Kamikaze trail has been one of our favorites so far. 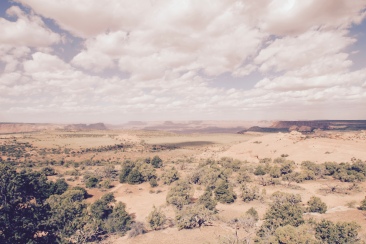 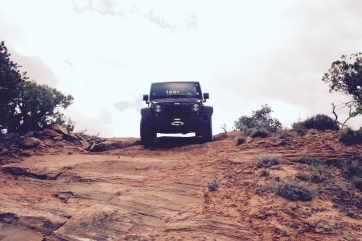 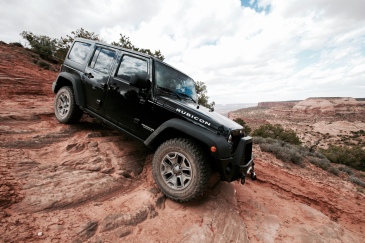 I think Bella had more fun walking the trail than she would have in the Jeep. Her legs are too gangly to stand upright and she hates to slide around in the backseat. Herb on the other hand, would start a nap at the front of the backseat and slide all the way to the backdoor without even waking up.

Our next drive was out to Canyonlands National Park – The Needles, which was also free for the weekend for National Parks Week. The Needles section of the park is located on the Southern part of the park. There are two other sections of the park, but they are not connected by any roads within the park itself (besides Jeep trails). This one does not have as much to see as Arches, so there were not as many people. There are some hiking trails to get better views of the canyons.

There are a lot of Jeep trails within the actual park that you have to buy a pass to go on. They only allow a certain number of passes each day, so we plan to go on these next time. Some of the trails take almost all day, which will require us to plan and block out a huge section of our trip for these. We also want to stay at the campgrounds in the park, since it would be nice to not have to drive to/from Moab each day.

On our way back to Moab, we stopped and saw these cool Native American petroglyphs on one of the roadside stops. The sign said that they were unsure what they meant. We were amazed that they stayed on the rocks for this long! 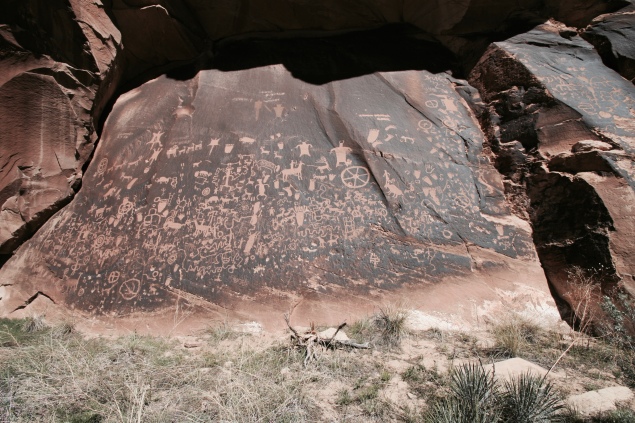 We also stopped at another arch along the highway. It was pretty cool that we could go up in it.

As we headed back into town, we stopped at Starbucks for some iced chai (yeah, our city side shows sometimes) and then went to the local dogpark to let the dogs run around a bit. Unlike the parks here in Colorado, this one was completely sandy. The dogs had a fun time playing with the other dogs.

We returned back to the campsite and made some dinner. It was a bit disappointing, but our campground did not have or allow fire-pits due to the fact it was right next to a nature preserve. So we made due with the food we had and just made a simple tofu scramble to eat with the pita bread, nothing too fancy (hence the lack of photos), but it hit the spot.

For morning, we had planned on making some stuffed French toast in the campfire, but settled on regular French toast on the grill’s griddle. Stacy had premade some cinnamon swirl bread from the cookbook Vegan Sandwiches Save the Day!, which was delicious! 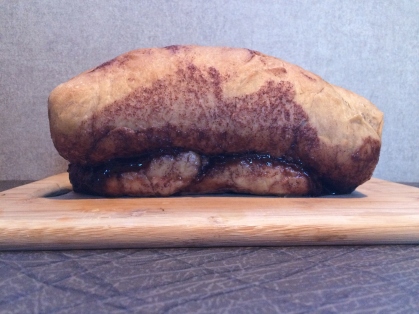 After packing up the camper and belongings (which actually went very quickly when you watch what you bring), we took Highway 128 East out of Moab that follows the Colorado River. It was a beautiful drive and we were able to also see all of the BLM camping places along that route for our future trip.

Goodbye for now Moab – until next time!

**Some of the links in this post will take you to directly to Amazon for easier shopping. These links are through the Amazon Affiliate Program.